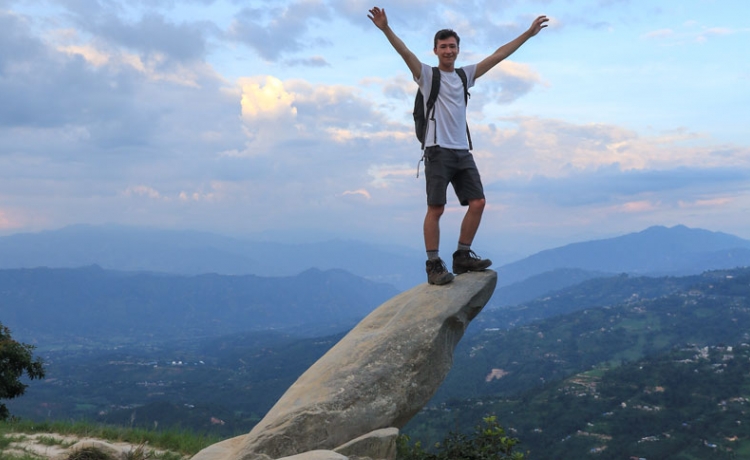 I embarked on a 3 day and 2 night expedition with Himkala Adventure to trek in The Valley Fringe with some sightseeing along the way. This valley is located just east of Kathmandu. Walking through this valley from village to village enables you to see how local life in Nepal really is. And of course, the views are incredible; lush green mountains, local villages, plantations and if the clouds allow it, the Himalayas!

Starting in the heart of Kathmandu at 8am on Wednesday 28th August 2019 with my guide, Shiva. Weaving our way through the hustle and bustle of Kathmandu we stopped to buy a few snacks for the next few days – biscuits, apples and more water! Coated in the dust blessing of Kathmandu we hopped aboard our first bus heading towards one of the top sightseeing sites in Nepal. 45 minutes later we arrived at the largest Stupa in Asia – Boudhanath. 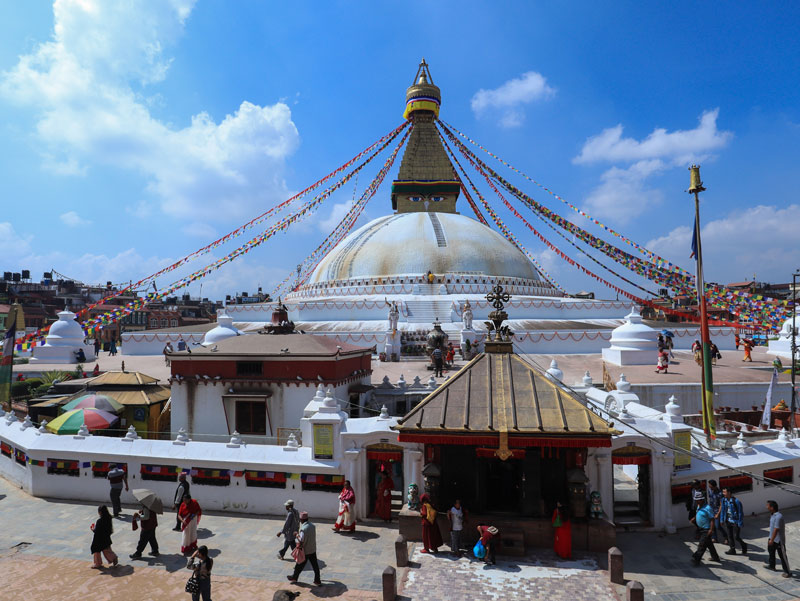 As Shiva explained to me, there are many theories as to why it was built, but the one that is the most factual is that is was built by King Manadev as redemption for his sin of fulfilling his father’s wish (he asked his own son to behead him). The monastery attracts many pilgrims as well as trekkers coming here for good luck. The spectacular white dome and spire is surrounded by a huge Tibetan community and it is fascinating to see all the monasteries surrounding the stupa. There are many shops selling: butter lamps, ceremonial horns, Tibetan drums, monks’ headgear and other Tibetan Buddhist life essentials.

After walking clockwise three times around the stupa, we headed back into the streets towards Pashupatinath Temple, a Hindu cremation temple. We stopped along the way at the old Guyheshwori Temple which is situated right by the holy Bagmati River. This temple was beautifully untouched, apart from the ongoing earthquake restoration. Before I could see Pashupathinath temple. I spotted a cloud of smoke emerging from below. From above we could see over the temple and the cremation rituals going on. The difference in culture compared to the western world when it comes to death and funerals, is fascinating. The bodies are brought to the edge of the holy river where water is poured onto their head and feet by family and friends to remove sin from the body. The body is then taken to one of the nine dedicated stone cremation slabs. As emotionally hard as this was to watch, being able to witness this first hand, is an experience I will never forget. 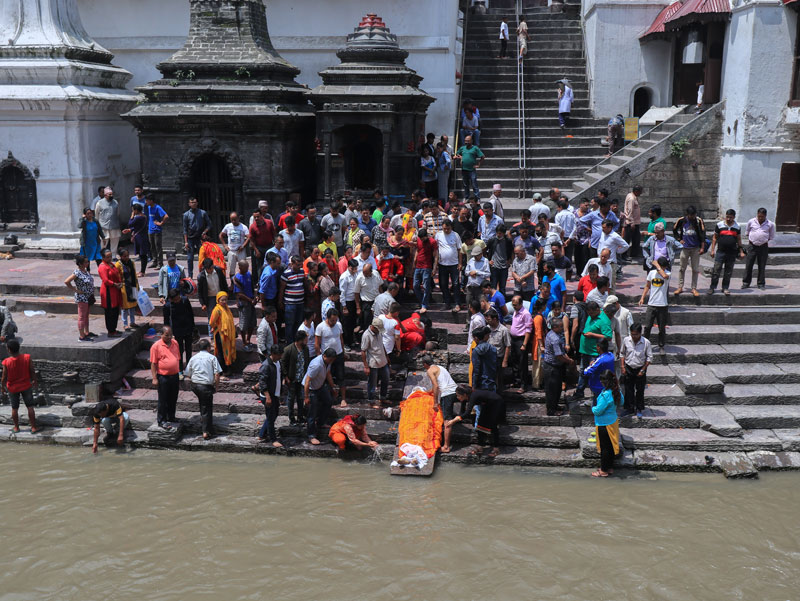 The final bus of the day to Nagarkot was one of contemplation for me. Arriving in Nagarkot we checked into the guesthouse and I was blown away by the beautiful views that could be seen from here. Unfortunately the weather wasn’t on our side and the fog and clouds reduced the visibility. Nevertheless, we walked to one of the lookout points in Nagarkot for sunset. We sat in awe watching the fog roll over the hills and the clouds climbing and descending as the light faded. Even though no sunset was seen, these are views I will not forget. We headed back for some good Nepali food and a good chat after a long day.

Starting at 4:30 am in Nagarkot, Thursday 29th August 2019. An early start for the second day to attempt to see a sunrise from the lookout tower. The walk is just over 1 hour and it was surprisingly warm for such an early time (17 degrees C!). From this tower, it is possible to have a 360 degree view of over the valley around. Once again the weather wasn’t on our side, so a sunrise was not seen, but normally the colours seen from here are beautiful, and if you are in the right season (not rainy season) it is also possible to see the Himalayas. We headed back to the hotel where we restored some energy and had breakfast before setting off at 8am to embark on my first trek through the local villages. It was fascinating to see the local life going on around me and how Nepalese people live. Many goats were seen along the way and a lot of corn plantations. Regrettably the view today was limited due to the fog that had been sticking around from the morning. Shiva told me that usually, it is a very scenic walk, but I was so fixated on the locals around me and the villages, that is was only a minor inconvenience. 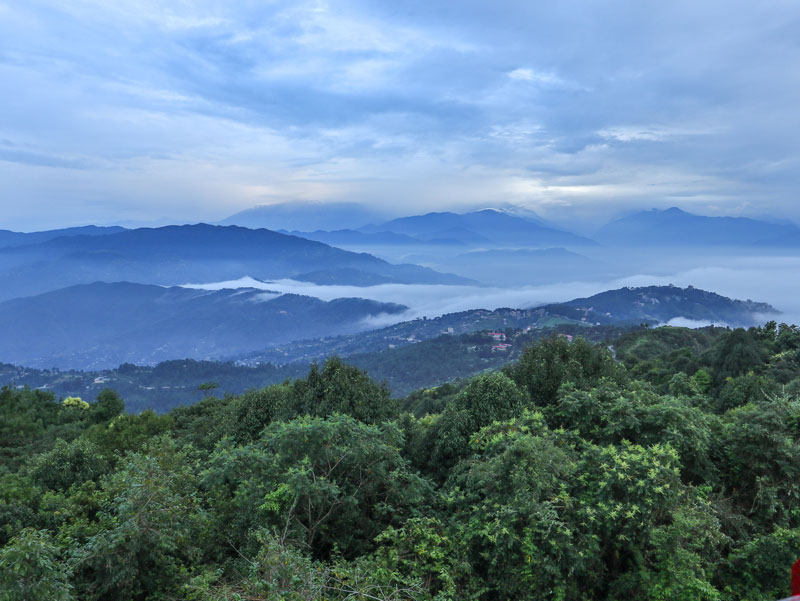 After 4 hours of trekking we arrived at Changu Narayan. This is the oldest temple still in use in the Kathmandu Valley. Different parts have been restored due to damage from earthquakes, but much of the temple and its intricate carved woodwork dates from the 5th century! A short rest later, we walked down to catch a bus toward Dhulikhel. When we arrived, we were greeted with clear skies and the golden afternoon light shining on the valley below. Shiva had gone the extra mile to get me a room with a view, and I was able to see the Himalayan peaks sticking out of the clouds from my room (and bathroom)! I sat on the rooftop at the guesthouse to take in the views before we embarked on a walk up to Kali Temple for sunset. Once again the weather had gone against us and a huge grey cloud covered up the sun. We headed down to see the views more clearly from a helipad! Yes, a helipad! In the middle of nowhere there is a helipad! This made for  a great photo opportunity as there were great views over the city of Dhulikhel. Once the sun had set and the lights had faded, we headed back for dinner and an early night sleep. Starting at 5am in Dhulikhel, Friday 30th August 2019. Another early start for a short walk back to the helipad for the final sunrise of the trip. We watched the lights come up on the city and the nearby villages. The views were beautiful, even though, once again, the clouds were against us. After a breakfast to refuel, we left at 7:30am, headed for Namobuddha.Today the weather was finally on our side and the sun was shining in the stunning valley. But with the joy of the sun, came the heat of 31 degrees C, humidity of 99% and the sweat rolling down my face. 3 hours later we reached the Tibetan Thrangu Tashi Yangtse Monastery). This monastery is situated right on the side of the mountain and is as stunning from the outside as it is on the inside. We saw lots of Tibetan monks walking around going about their day to day life. We were lucky as it was a full day of prayers. So, we were about to witness the unusual worshipping in the hall. The chants, music and colourfully decorated hall was just mesmerising; and we sat there for at least half an hour. There were monks of all ages; some couldn’t have been more than 10 and some others more senior - leading the ceremony. Some snacks and drinks were given out and also kindly handed to us; these included banana pieces and squash! Nearby there is also a great viewpoint to see the monastery in all its glory. A few photos later we headed down to the valley towards the town of Panauti. 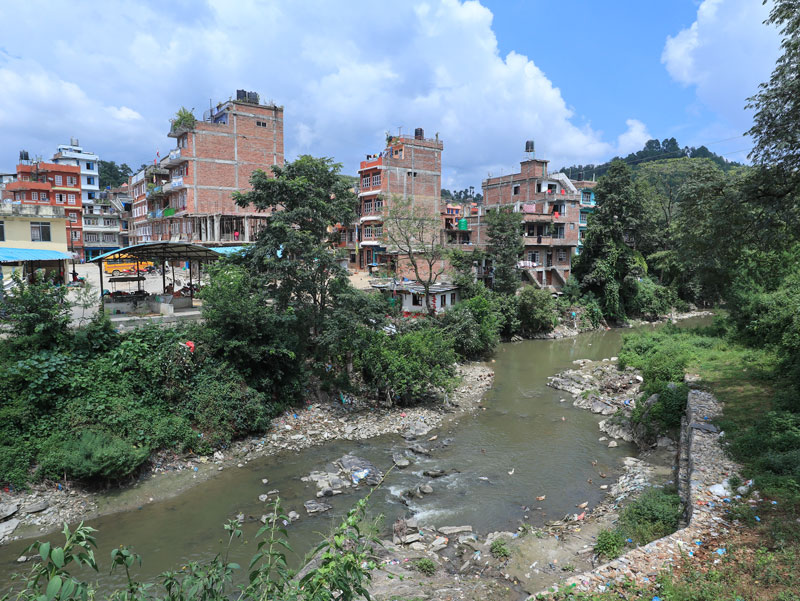 This walk was beautiful! It went through rice field bathing in the golden sunlight with herons hunting for insects and Nepalese ladies harvesting the rice within the fields. We also saw mushroom and corn plantations along the way. Finally after two hours and a half of walking we arrived in Panauti, our final stop. We came across a smaller Hindu cremation temple that was used for the local villagers and navigated our way through the streets of yet another beautiful old Nepalese town. Our final bus took us back to Kathmandu where my incredible adventure ended.

Review of the trip:

I had an amazing and unforgettable experience with Himkala Adventure! After going on the ONLY free walking tour in Kathmandu I decided I wanted to do a bit of trekking in the nearby Valley Fringe. I came to Shiva, Himkala Adventure’s Director; to ask him what he thought was the best next step. Before I knew it, he had come up with a complete itinerary for 3 days and 2 nights with some fantastic sightseeing included. Shiva was an excellent guide! He is easy going, kind and very knowledgeable. If you are looking to do some trekking in Nepal, I very highly recommend going with Himkala Adventure!