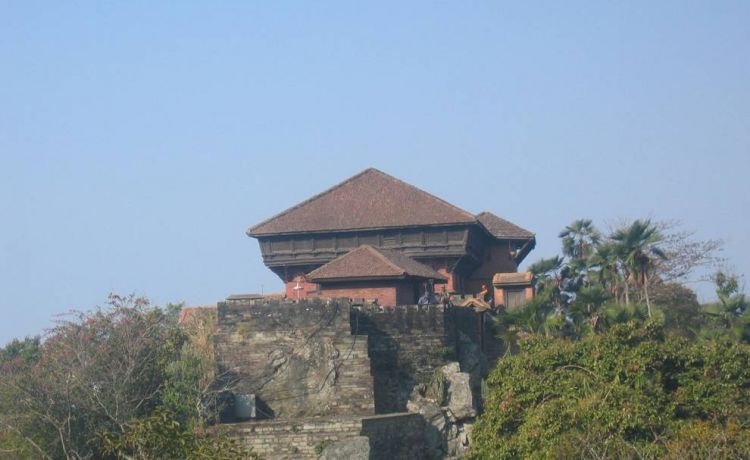 Gorkha is 124 km west from Kathmandu. It takes about 5-6 hours by bus. The trip to Gorkha from Kathmandu is full of scenic beauty alongside the Trishuli, Marshyangdi and Daraundi River.  Gorkha is the ancient seat of shah dynasty. Gorkha is the birthplace of late king Prithivi Narayan Shah (born in 1723), who unified small territories into strong nation. It is because of Gorkha that Nepali soldier inherited their name as Gorkhalis. The artistic, majestic, fort, a palace, and the temple perched high on the top of the hill around 1000 feet above the Gorkha Bazaar, the Gorkha palace is the major attraction in Gorkha. The palace complex offers attractive views of mountains like Annapurna, Dhaulagiri, Manaslu, Himchuli, Lamjung Himal and other peaks in the north and lush green valley in the south.

About 1700 steps lead you to the top of the hill.On the south west side of the palace is the temple of Goddess Gorakhkali, which was built in the reign of king Ram Shah. There is also a mausoleum of Guru Gorakhnath Baba (sage). It is believed that the name of Gorkha was derived from the name of this sage, whose blessings inspired King Prithivi Narayan Shah for the unification of Nepal. The temple of Gorakhnath is another attraction in Gorkha.

Other places like Old Gorkha Bazaar, Ratna Mandir, Bhimsen Temple and Tallo Durbar built in 1835 are worth visiting.Tallo Durbar has been changed into the museum surrounded by a beautiful park.

Day 05:Drive back from Gorkha to Kathmandu, 5/6 hrs. Overnight stay at hotel in Kathmandu

Day 06:Transfer to the Airport

Day 01Arrival in Kathmandu (1,350 m) and Transfer to the hotelAfter you get off the plane, you pass through the passage where the panels are hung on the wall those identify the country and you approach the custom clearance section. After the custom formalities, you arrive in the exit door of the airport. Our representative from Himkala Adventure will be waiting for your arrival and greets you heartily and transfers you to hotel at Thamel. Thamel is 5 km west from airport which is touristy place and you could recreate a lot with its old and new architectures, many different souvenirs shops, restaurants, narrow lanes, artistic wooden arts and crafts etc. Overnight at Kathmandu

Day 02Sightseeing of World Heritage sites in Kathmandu valley After breakfast, we begin our sightseeing, first we head towards Swoyambhu Stupa or people call it lovingly ‘The monkey Temple’, perched on hill 3 km west of Thamel. It is the great place to get your bearings, geographically and culturally. The hill commands a sweeping view of the Kathmandu Valley. It is a real eye opener. The monks and the visitors walking around Stupa , the monkeys running here and there, seems playful and the old stupa with Buddha eyes painted in all its four sides is the most profound expression of Buddhist symbolism in Nepal. Tantric Buddhists consider it the chief power point of the Kathmandu valley.After this, we come to teeming, touristy Kathmandu Durbar Square which is known by other names like Hanuman Dhoka, Basantapur. It has many Hindu temples, the Kumari – the living goddess Gaddhi Baithak, Nasal Chowk where the coronation would take place. The third place we visit is Boudhanath Stupa, which is about 6 km from Kathmandu, is one of the largest stupas in the world.It is generally acknowledged to be the most important Tibetan Buddhist monument outside Tibet. Tibetans simply call it Chorten Chempo or “Great Stupa”.This has been the Mecca of Tibetan exiles in Nepal. The fourth place for today’s sightseeing is Pashupatinath – the Shiva Temple, the temple of supreme Hindu God. It is Nepal’s holiest pilgrimage sites where we can see a time warp enclave of exotic temples, cremation ghats, ritual bathers and half naked sadhus. After the sightseeing of these four places, we return back to hotel in Thamel. Overnight at Kathmandu

Day 03Drive from Kathmandu to Gorkha (1,220 m), 5/6 hrs. Overnight stay at hotel After breakfast, we drive from Kathmandu to Gorkha. It is 134 km west through hills, country side, terraced farmlands. We follow the bank of Trishuli River, the popular rafting river for mild rafts, streams and reach to Gorkha. Gorkha is a historical town, the origin of Shah Dynasty and the gateway for the Manaslu Trekking and many other village tours. In the time of monsoon, the flowing rivers and stream produces wonderful sound, the playful clouds seem kissing the horizon and the local folks are found in wonderful lyrical song singing and planting rice. Overnight at Gorkha

Day 04Sightseeing around Gorkha Bazaar, Tallo Durbar, Gorakhkali, and Gorakhnath Baba cave Gorkha is a hill town. Hiking lovers can enjoy a lot. We visit Gorkha Museum and hike to Gorakhkali temple. There we can see Gorakhnath cave, Kali Temple. It is the superb view point for the scintillating mountain views and nearest hills. We descend from the way of Ram Shah Chautari and arrive at the hotel. If anyone would like to go by bus to the top, there is a pitched road through the village near to the Temple. Overnight at Gorkha

Day 05Drive back from Gorkha to Kathmandu, 5/6 hrs. Overnight stay at hotel in Kathmandu After breakfast, we drive back to Kathmandu by the Prithivi Highway. We come across through many streams, hills, bridges, Rivers. We find the countryside very much alluring with the terraced lands and the farmers working there. After our arrival at Kathmandu, we do check in hotel and take rest. Overnight at Kathmandu

Day 06Transfer to the Airport Your trip to the Gorkha Kalika Temple Tour ends today. We depart you to airport 3 hours before your scheduled flight. If you would like to buy dainty gifts for your family, relatives and friends, we could help you guiding into the bustling local market of Kathmandu. Finally, we escort you to the airport and leave you on the gate of departure. Wishing you safe and happy journey, we say bye and Namaste!!! The time that I spent in Namjung and Bungkot was an experience that I will not be forgetting in a hurry. We awoke early to hop onto a bus that…...