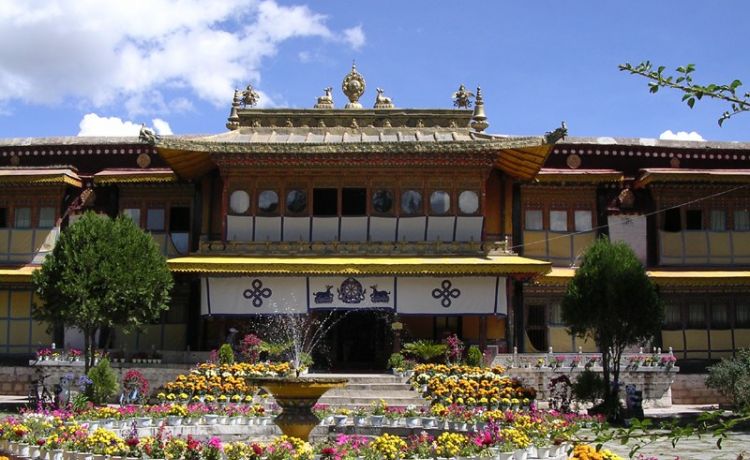 Lhasa means “the place of the Gods” in the Tibetan language. The city is surrounded by treeless hills and lies in the valley of the Kyi Chu or Lhasa River, which flows southward to pour into the mighty waters of the Yarlung Tsangpo River. There is Marpo Ri, the “Red Hill” rising above the city of Lhasa and there is one of the world’s largest and most amazing Potala Palace on this hill.

A hundred years ago, a visit to Lhasa took stamina, nerve and a good deal of luck.It was due to the formidable challenges like the Himalaya and the vast desert wastes of Central Asia. Lhasa was “The Forbidden City”, the epitome of all that was mysterious, magical and unknown. But the overland trip to Lhasa has been very easy these days and the journey up to Karo La Pass, 5200 m, the great Lake of Yamdrok Yumtso shimmering below, the red and white walls and the golden roofs of the Potala Palace appear, floating above the city like a fairytale castle take you to the state of  tremendous amenities.

Lhasa is magnet drawing in pilgrims from the farthest reaches of the religion. One wishes to visit this holy city at least once in his or her lifetime. This city is a shrine for the pious souls. So, the land which has rich cultural, traditional, the far flung unique landscape, Tibetan myths and mysteries, and a unique brand of Mahayana Budhhism, is full of thrill and excitement.

You begin your tour flying from Kathmandu (1,350) m to Lhasa (3,650 m). You find Tibetan people very calm, jovial, relaxed and independent in their activities. Jokhang temple houses Tibet’s most precious religious relic.  Barkhor is the main focusing point, showing original outlook of Tibet. The Potala Palace has served as the residence of the Dalai Lamas of the Gelugpa sect.
The largest monastery 8 km. west of Tibet is Drepung Monastery is housing over 10,000 monks. It was founded by the disciple of Je Tsonkhapa in 1416. Another influential, Sera monastery was founded in fifteenth century has golden roofs and whitewashed walls. This is situated in the Tatipu Hill, north of Lhasa. The Monastery has different identity on debating activities between the monks 3 to 4 pm daily.

Day 03:Drive to Drepung Monastery, Sera Monastery and back to Hotel. O/N at Hotel

Day 04:Fly back from Lhasa to Kathmandu