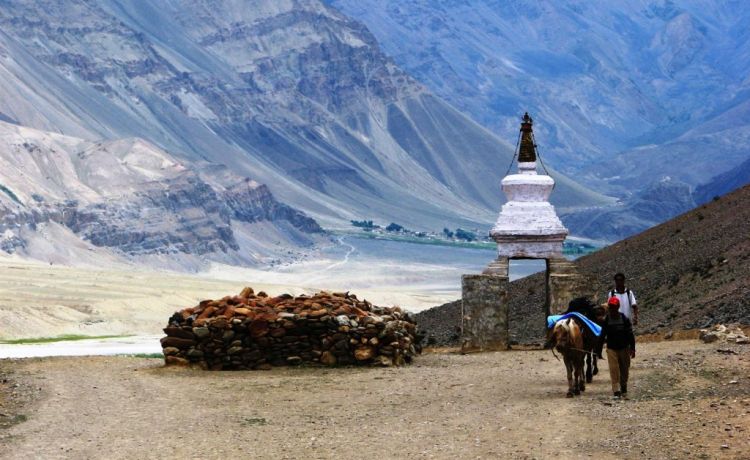 Ladakh lies in Jammu Kashmir state of India. Ladakh, the land of high passes is situated at about 2750 m at Kargil to 7672 m at Saser Kangri at Karakoram. It is northernmost part of India, inhabited by Indo-Aryan and the Tibetan descent. This is in between Karakoram and Himalayas. Ladakh is the highest plateau of the state of Kashmir over 3,000 m. Ladakh is the sparsely populated areas. The largest town in Ladakh is Leh followed by Kargil. There is great influence of Tibetan Buddhisn in Ladakh.

The ranges are less than 6,000 m in Ladakh as there are no major peaks. Some of the passes are less than 5,000 m. Vegetation is sparse in Ladakh but the faunas are much in common with that of central Asia.  There are 225 species of birds recorded including Black Redstart, Hoopoe, Brown Headed Gull, Ruddy Sheldrake, Bar Headed Goose, Black necked Crane, Eurasian Magpie, Red-Billed Chough, Tibetan Snowcock, Chukar,Lammergeier, and the Golden Eagle. Ladakh is home for Blue Sheep, Tibetan Antelope, Asiatic Ibex, Tibetan Gazelle, The Kiang or The Tibetan Ass. There are about 200 snow leopards found in Ladakh.

Adventure Tourism has played vital role for the economy of Ladakh like hunting, fishing and trekking. The culture of Ladakhis is similar of Tibetans. The famous festival they celebrate is Hemis festival. This is celebrated in June in the honor of Guru Padmasambhava. The government of Jammu –Kashmir also organizes the Sindhu Darshan Festival at Leh in May-June on the full moon day.Winter at Ladakh can be difficult due to heavy snowfall. One can enjoy the culture, their handicrafts, wall tapestries, and eye-catching monasteries.

Day 05:Flu from Leh to Delhi for your next journey