My Holiday in Nepal: Trek and Tour with Shiva

I arrived pretty late at the Kathmandu airport at around 9pm. So the price for the taxi was already higher because in the night times taxis are more expensive. But I still made it safe to Machapokhari chowk where Shiva picked me up and took me to his place.

After breakfast, Shiva and I went to his office to pick up a sign for his Free Kathmandu walking tour. He does this tour every Monday and Wednesday. It starts at 11am at the entry of the Garden of Dreams.

This tour is actually free without any backdoors, believe it or not. Shiva is just a really open hearted person who does this for free to raise the interest of Nepali culture. We started by going to Thamel, a touristic area with a lot of shops. There we saw a lot of temples like the local stupa Katheswoyambhu and the temple of the white Machhindranath which I would really recommend. Because locals often held traditional rituals there, this is quiet interesting if you ever wondered where Hindus get their red dots from. After that we have been to the Thahity area which is similar to Thamel but with more local people and shops which makes shopping there a lot cheaper. And its a nice way to experience the Nepali street/market life. In this area you also find the famous "Freak Street" as locals call it, where a lot of hippies stayed in the 60s/70s. Then we walked to the Durbar Square where you can see the effects of the earthquake 2015 which looks really interesting especially how the people stabilized and fixed the temple and the area around it.
The last stop was the big Swoyambhu Stupa or more common called the Monkey Temple. This temple is located on top of a hill which is a little walk but you will be rewarded with a really nice view over Kathmandu and some cute monkeys.
The way down we took the 365 stairway which symbolize for each day of the year.
All in all I had a great day with Shiva and I would really recommend doing his city tour around Kathmandu because as a licensed city guide he knows pretty much about the city. The next day we went to Shiva’s office again where he did a bit of office work and I was writing some reviews of the places I have been to. 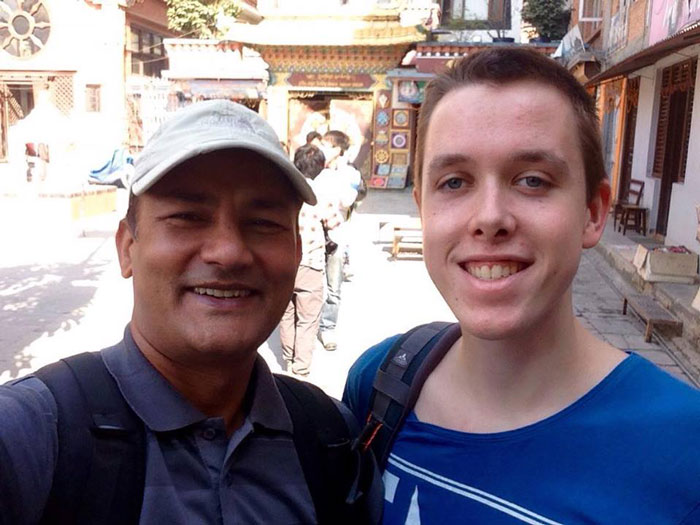 The next morning we got up early to catch a micro bus to Gorkha. The way was pretty nice because I got to see a lot of places next to the highway. About six hours later we finally arrived in Gorkha where we had about 2 hours until the bus to Namjung drove off. During this time we walked around the city a bit and visited the Gorkha museum, which is actually a really beautiful building with a lot of hand carved wooden door and window frames. I would really recommend you to visit it because you can learn a lot about the history of Gorkha, which is quite interesting. Then we took a bus to the small Village of Hukkaban in the Namjung area. This is the village where Shiva grew up and his parents still live.

The next day Shiva and I walked around the village a little bit and hiked to the top of a hill nearby.
Thus this village lies in the middle hills of Nepal so you don’t get to see the mountains, but you still have a really nice view over the surrounding hills and the villages and rice fields. From the top of the hill, you could even see two rivers, one from Tibet and the other one originating from the Southeast of Nepal. 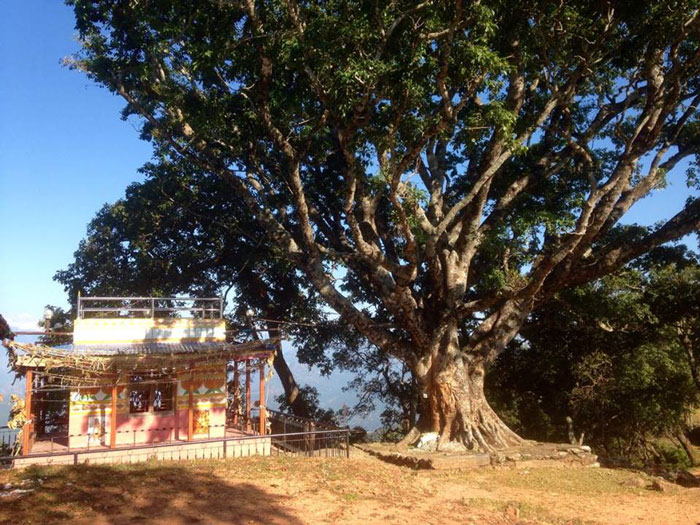 We also went to a local temple and discovered some evidence of tigers in this region, white pooh.
During my stay in the village I was really well welcomed and treated as a family member which made my stay unforgettable.


My time in Nepal with Shiva
Part 2

The next morning, Shiva and I walked through the rice fields of the village and I experienced the village life which mostly consisted of harvesting rice at the time.
After lunch we had to hike to another village because the Maoists (a rebellious political group) called for strikes, so there were only a few busses driving around that day. But we managed to catch a bus to the village Belbhanjyang Dumre where the grandfather of Sharmila lives. Since the grandfather turned 84 that night, (which is a special birthday in Hinduism because it symbolizes the beginning of a new life) there were a lot of celebrations and ritual activities. I have to admit here that Nepali people really know how to celebrate. Only with singing, dancing and playing some drums and tambourines they created an atmosphere I have never experienced like this before. There I got also treated like a family member and people were looking after me. Especially after I danced with them, all we enjoyed a lot.

I only got a few hours of rest and Shiva didn’t go to sleep at all because the people continued dancing and singing throughout the night.
In the morning the birthday celebrations continued and the people all gathered around the grandfather providing him with presents such as clothes and money.
The birthday ceremonies finished with everyone walking up the hill to the local temple to pray. After that Shiva and I left to take the bus to Pokhara, where we took another bus to get to a hotel next to the Phewa Lake. Both of us were pretty tired so we relaxed for the rest of this day and only left for dinner. In addition we went to a bookstore because I just finished the book I brought with me but still wanted to read.

Sleeping in a comfortable hotel bed got me so well rested that I couldn’t wait to go for trekking this morning.
After a short breakfast at a local cafe Shiva and I took a bus to a central bus station from where on we took a bus to Nayapul. This is the village where most people start the Ghorepani trekking to the Annapurna region. We hiked quite a long way until we had to face a really hard steep consisting of 3600 steps. This was quite hard but with a lot of small breaks and climbing them slowly we finally made it to the small village Ulleri. In a little hotel I was also finally able to take a real hot shower.

The second day of our trekking was not a hard one.
It was very pleasant to hike through the mostly forested area, because the trees were protecting us against the sun. In addition we got to see a lot of waterfalls and a beautiful almost jungle like forest. After about three hours of hiking we reached the village called Ghorepani. The hotel where we stayed had a terrace which provided you a breathtaking view of the southern Annapurna Mountains. Still I was really tired and went to bed pretty early to be fit for the next day.


My time in Nepal with Shiva
Part 3

We got up very early at 4'o clock in the morning and hiked up to the top of Poon hill. Since it is situated at an attitude of 3210m you get a beautiful view of the Annapurna Mountains. After returning to the hotel and a quick breakfast we started our third day of trekking. It started with a very hard steep again which brought us again over an attitude of 3000m. I felt like I was almost dying on these stairs because we had no water left. After finally reaching the top it was a comfortable walk for the rest of the day. The trail continued through a lovely forest on top of a hill and also led us through a beautiful river shaped gorse. Only stopping once to have lunch we arrived in Ghandruk after like 10 hours of hiking including the walk up to Poon hill. We also got to see some monkeys and a lot of mules and sheep crossed our path. Shiva and I were both really tired after this hard day of trekking and went to bed early with burning legs.

This day was the complete opposite to the previous one.
From Ghandruk we only had to walk like an hour down to a road where busses could drive again. Then we spent like 10 hours travelling from Ghandruk to Kathmandu. We first took a bus to Pokhara, then a taxi to one of the main bus stations and at last a micro bus to Kathmandu. 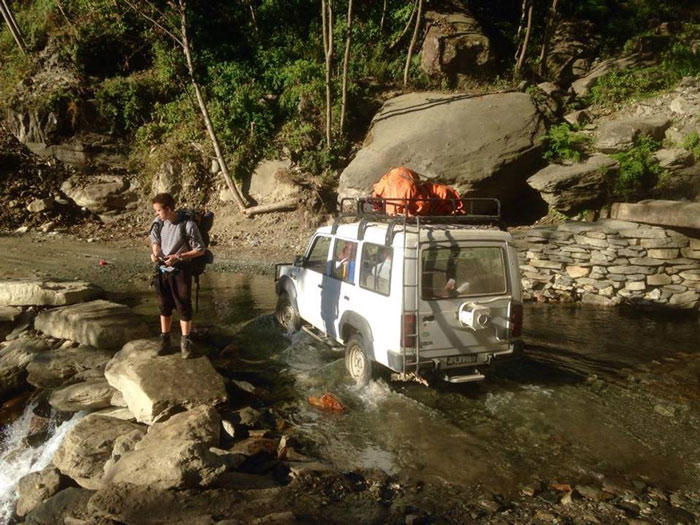 Unfortunately we got stuck in a big traffic jam after reaching Kathmandu which made the bus drive even longer. But we finally arrived at Macha Pokhari and another volunteer from Germany was already waiting at Shiva’s place. She had stayed with him before I arrived and just came back from the Everest Base Camp Trekking. So we had a nice dinner together and we both enjoyed talking a bit in our mother language.

Just woke up and packed my bag before having a last delicious breakfast with Shiva and his family. Afterwards Shiva went to Machapokhari with me for a last time and managed me a bus ticket to Trisuli.


Here you go brother ;)
Again I have to thank you for everything; you surely made my stay in Nepal unforgettable especially with the birthday celebrations of Sharmila’s grandfather.
Best wishes
Paul (From Germany)