Shiva and I walked across the river to the bus station, and caught a bus to Pokhara. It took quite a while to get out of the city, as we first had to fill the bus, then got caught in the hectic traffic, and then got caught behind road works. Finally once were in the hills we made faster progress, and the scenery also improved. It was really beautiful, with the river and villages below us, and the snow capped mountains in the distance ahead. I listened to a bit of my own music and then to the Nepali music playing through the very base heavy bus speakers. We had a lunch of samosas and some kind of vegetable curry balls at a roadside restaurant, they were good. It was dark by the time we arrived, and so after checking into our hotel we walked into the streets and found a place for dinner. Then I had a proper shower before bed, which was nice. I had muesli for breakfast at the hotel, a nice change. Then we walked to the lake and through the lakeside street, which looks interesting - lots of cool bars advertising live music. I think I might be coming back for a while. We stopped to look at some Nepali flutes before catching a very shiny and colorful bus further into the mountains. The ride was very scenic, leading along the side of, and up into, the mountains. As soon as we arrived we began the trek; first along the river and through rice paddy hills, and then up the mountainside and through many little traditional Nepali villages. Along the way we stopped for lunch at one of these, in addition to the corn and nuts we ate as we walked the trail. The final climb was of 3500 steps, and the view of the valley below improved with each one. We came to the village we would be staying at for the night not long before dark, I was quite exhausted. We rested up and then ate dinner with the four other trekkers staying at the guest house and their guides. Together we spent the evening talking about our travels so far, our plans, Nepali culture and Nepali food.

After having breakfast with the few other trekkers at our hostel we set off on the walk to Ghorepani. The path first led through the rainforest; we saw waterfalls, villages, monkeys, birds, buffalos, and, as we came over the hills, the mountains. They were suddenly much closer and by the time we reached the village we could see a large section of the range, including The Fishtail and Annapurna I. We had lunch taking in this amazing view.

After having a rest we walked up to Poon Hill, it was steep but felt easy without our packs, and the view was amazing. We could see the same mountains but from higher up once again, as well as the fog surrounded hills and valleys down below us to the other side. 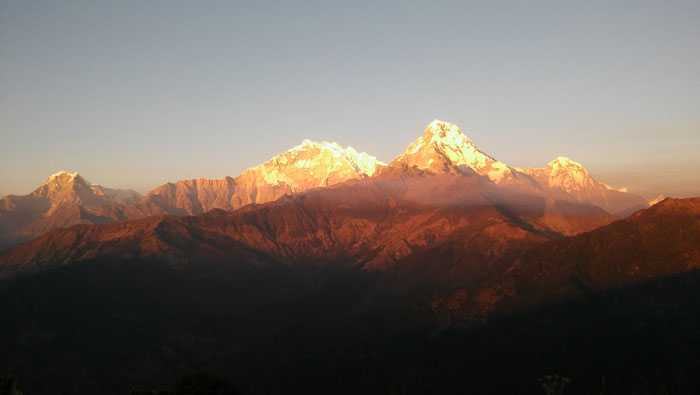 While we waited for sunset there I talked to Mara from Germany, one of the other trekkers from the guest house last night, about our plans and travels. Slowly the sun fell down upon the hills and the mountains were painted a magnificent orange.

I woke early and could see the sunrise breaking through the fog over the hills out the window. After breakfast Shiva and I started walking, for the first couple of hours, along the top of a range - and so we had amazing views of the snow capped mountains to our left and haze surrounded hills to the right.

The path then led through a forest and along a stream with bubbling waterfalls and rock pools. One of the waterfalls was surrounded by hundreds of rock stupors; stacks of flat rocks which passerby's add to for good luck. We came to a section of the path which was layered in loose rock, and Shiva stopped us for a moment to study the small rocks rolling down the cliff face, then he told me we would pass through quickly, as their had and possibly would be a landslide. Later on the path was blocked by buffalos, and so we found our own way around, staying clear of them but watching them with curiosity. 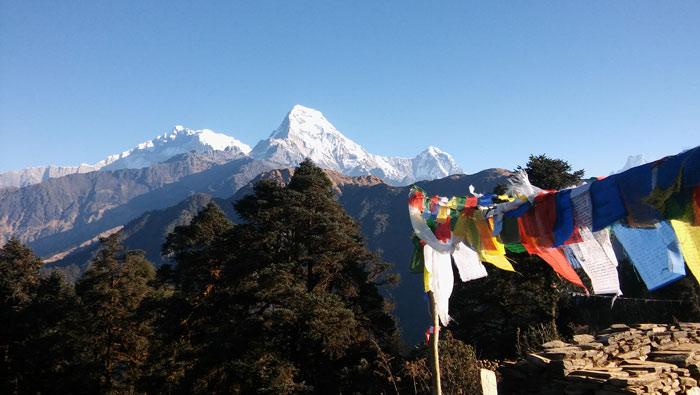 We had a lunch, some momo's and chapati, at a small town with a good view of the mountains, and then we continued on again through similar forestry. We arrived at our hostel in the afternoon, a nice place in a Gurung village, of the kind known for their beautiful slate rock roof houses. I had a rest and then went for a walk around the village to explore as the sun was setting.

Day-5: Trek to Kimche and drive back to Pokhara

Shiva and I went for a quick walk around the town for sunrise. The houses are quite beautiful; with white walls, dark stone slate roofs, and bright red or blue windows and doors. Many of the walls were lined with corn or beehives. For breakfast we ate at our guesthouse, and I had a really nice banana pancake. We hiked the final hour of the trek down to a village at the base of the valley, and from there caught the bus back to Pokhara. Trekking to Ghorepani and Poon Hill is one experience I'll never forget. The scenery along the way was beautiful; whether it be the snow capped mountains, dense forests, bubbling waterfalls, traditional villages, fog filled valleys, or rice paddied hills. And the sunset from Poon Hill was spectacular. Shiva from Himkala Adventure was a great guide, very helpful from before the trek even started, and very friendly. He also knew a lot about the mountains and the culture in the villages. The places he had organized along the way to stay at and to eat at were very hospitable and nice. I would most definitely recommend doing this trek or another with Himkala Adventure.

A huge thank you to Shiva and Himkala Adventure for this opportunity. It has been a great time and I can't wait for the next trek!
All the best,