The mountains of Gorkha are a mystical place inhabited by wonderful people. I feel very lucky to have had the chance to spend some time with them. The four of us left the house in Kathmandu first thing in the morning to catch a bus to Gorkha. It was the first of two days of the festival of Teej. A celebration of womanhood where the women adorn themselves with elegantly bright clothes, jewellery and make-up, and head back home to their villages to spend quality time with their families. The buses were chock-a-block and Sabinaya and I, sat in the front two seats, constantly had to contort ourselves into inhumane positions as people squashed themselves in and levered themselves out at various villages along the way. The scenery kept my mind occupied though. The road followed the valley of a river that had carved steep cliffs either side that were clad with bright green, fertile jungle. 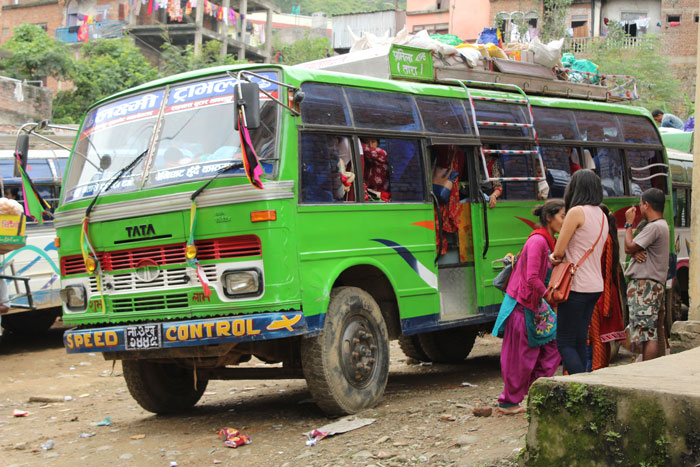 Upon arrival in Gorkha, Sharmila and Sabinaya left us to catch a bus to Sharmila's village, not too far from Shiva's but a good hour and a half walk over very lumpy terrain. To pass the time until our bus left we decided to utilise Shiva's tour guide knowledge and went to the lower Gorkha palace which was largely unaffected by the earthquake in 2015. Quite remarkable in itself considering Gorkha was at the epicentre of the quake. The doors and windows of the palace were skilfully hand carved with ornate patterns and stained jet black, contrasting wonderfully with the terracotta coloured brickwork. The bus ride to Namjung was worthy of a blog post of its own. Our chariot was one of the many Indian Tata machines that are used for buses and lorries in India and Nepal, with a brightly painted shell and fluorescent tassels lining the roof of the cockpit. The Tarmac road quickly turning to dirt, rock and debris as we wound our way round the mountain side. Monsoon season in Nepal doesn't mean constant rain but regular showers and the need for tractors for farming and restocking shops meant that the ruts in the road became deeper and deeper the further into the mountains we travelled. The worst I noticed was at least three feet deep. Signs of the earthquake were so apparent. Tin huts occupied the space where houses, build by the hands of the villagers and their predecessors, once stood. It was a sad site to see but smiles still lit up faces of onlookers as we passed by. My guess is that they were laughing at the site of our bus furiously rocking from side to side throwing its passengers around within, screaming and giggling in equal measure. Both driver and machine were being stretched to their limits. The driver's forehead covered in beads of sweat as he hung out of the window watching the tyres spin and spin and fail to gain any purchase on the muddy surface. The rest of the team worked tirelessly to get us out of the predicament, eventually getting us onto firmer ground after two hours of toiling over a kilometre stretch of road.

In the pitch back we precariously walked down the hill by iPhone torch light to the house of Shiva's mother and father. His mother was at her sister's for the festival so his father kindly cooked us dal bhat and a curry with a vegetable called bitter guard, which, as the name insinuates, is extremely bitter and took me a couple of tries to get used to. A bowl of buffalo milk was also placed beside me which I gulped down, the flavour earthier and so much more delicious than cows milk. I only found out the next day that the buffaloes lived in a hut in the garden just behind where we sat along with four goats. Shiva's uncle who lived next door arrived while we were eating dinner for a catch up. The two brothers were the double of each other. Both as thin as rakes with leathery skin stretched over their limbs revealing a network of veins, tendons and muscles. They both spoke with great purpose and asked me questions which Shiva translated from Nepali. 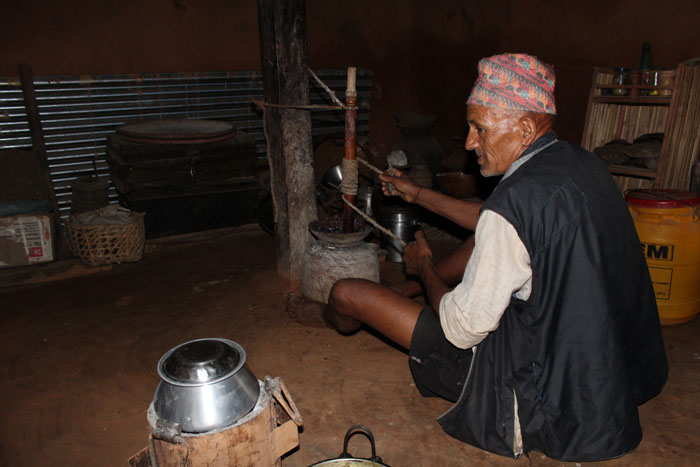 After dinner we went to bed in a metal shed that had been erected in the garden post earthquake. The second floor of their house completely collapsed when the earthquake hit leaving only the kitchen room and some storage intact. These people have had it incredibly hard in the past year and a half but have kept their kindness, pride and sense of humour.

Our original plan was to wake up early the next day to hike to the top of the steep hill next to the road which would give us 360 degree views of the surrounding area. Unfortunately, around midnight, the sound of heavy rain began pounding the roof and started again in the morning. With the mountainside being so sheer, Shiva and I decided that a walk around the paddy fields would be a more sensible option for the day and try our luck with the weather the following morning. Because rice needs to be planted on flat ground and the angle of the mountains are so steep, the ancestors of these villagers dug terraces into the hill which are irrigated. Water constantly flows from local water sources down to each terrace keeping the rice plants saturated. A simple but ingenious idea and the effect it has on the scenery is magnificent. The rich green colour of the fields creates beautiful rippling patterns that flow across the hills with whisps of thick mist adding to the mystique. We were stopped in our tracks for a chin wag by a family sat outside their house before we started making our way up to the road to visit a local temple. The figure of a little, old woman appeared a further up the hill. Her pace was somewhat slower than ours due in part to the enormous stack of grass, twice her size, that she carried on her back with a strap around her forehead. As we overtook she stopped us, nodding as well as she could at my camera and explaining to Shiva that she wanted me to take her photograph. I happily obliged. Shiva spoke to her briefly and explained that he had asked her how far she had carried her load. He pointed to an area that must have been 2km away. We walked a further kilometre or so up the road and he pointed to a house saying that this was where she lived. She can't have been any younger than 65 and she would make this journey twice a day. Every day. We strolled for an hour with Shiva pointing things out to me periodically. The local temples, schools and also a group of tin shed's where he explained the 'untouchables' lived. The people that are pigeon holed into the lowest caste of Nepal's social caste system. I still have a lot to learn about India and Nepal's caste systems but of what I do know it's a terribly awful and unfair design. On our way back we started to hear the blaring of Nepali music from a crackling speaker and as we turned the corner there were fifteen or so women dressed in the festive red, green and gold. They danced to the music, laughed, smiled and generally made the blokes look like a bunch of chumps. They were a delight to watch. Unfortunately the evening had brought more rain so it was decided that we should hike for a few miles to Sharmila's village and stay the night before catching the adventure bus back to Gorkha the following day. The exercise invigorated me with the ups and downs of the roads and paths stretching my legs and my lungs drinking in the clean air. We were greeted with smiles as we arrived at Sharmila's home, a quaint house which her father had recently rebuilt himself after the earthquake all but destroyed the original building. They were both thoroughly charming. It amuses me that they spoke to one another in soft, conversational tones but when talking to me they shouted at the top of their voices, as if speaking louder would make me understand Nepali. Two buffaloes and six goats occupied a hut next to the house while two kid goats leapt around playfully outside. The views were magical. Paddy fields and thick forest stretched out as far as the eye could see and dragonflies flooded the sky, whilst flies whose bodies reflected the sun buzzed around like tiny orbs of light. We were fed as soon as we arrived, dal bhat, curry and copious amounts of rice. All eaten with our hands, the Nepali way. When I asked why they ate with their hands I was told that it was so that you could feel the food as you ate. It didn't take me long to get used to the idea. I find the introduction of another one of the senses fantastic and I recommend trying it. The rest of the day was spent picking vegetables from the fields, eating freshly picked peanuts and roasted corn, showering at the local water supply in the forest and generally watching time go by in beautiful surroundings. As night fell below clear skies, the beautiful streak of the Milky Way, a distant thunder storm and the occasional firefly shared the same stage. I was told it is not uncommon for wild tigers to roam around the village. A wonderfully magical place. I must have made a good impression on the villagers because I was invited to stay, marry a village girl and settle down forever. A nice offer but I politely declined. Village life had literally charmed my socks off but the next morning was to be our last. After saying our goodbyes and hiking back up to the hill, to our dismay we heard the bus rumbling along the road in front of us. We must have missed it by thirty seconds. Another rumble along the road offered us a slightly less comfortable alternative. A tractor towing a trailer carrying twenty or so people pulled up beside us. I apprehensively hurled my bag over the gate at the back and heaved myself onboard. If the bus ride to the village was uncomfortable this was excruciating. We clung on to what we could, including arms, legs and shirts, to stop ourselves from being thrown of the back of the trailer. I sat on the floor with my knees up to my ears but every lump and bump in the road threw me backwards into the metal frame. By the time we reached Gorkha I felt as though I'd just endured playing an international rugby match. Village life is simple but not easy.

After having a to do with a tosser who was trying to rip us off, we made it onto the bus heading to Kathmandu. I felt sad to leave the place. The area is completely magical and the people left me feeling content, happy and peaceful.

If you're looking for a relaxing time in beautiful surrounding but are on a budget, the village experience with Himkala Adventure is what you need. You will not be disappointed.