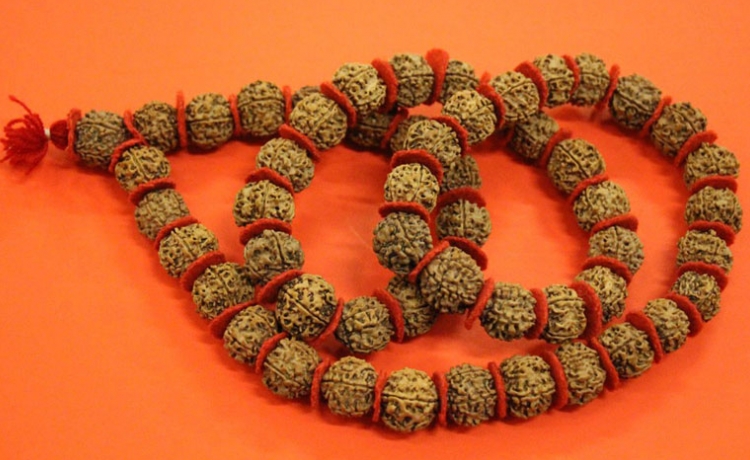 Rudraksha is a Sanskrit word, consists two words-Rudra and Aksha. Rudra denotes to Lord Shiva and Aksha refers to tear. It is believed that when lord Shiva was in his deep meditation, a drop of tear fell of his eye which grew into the divine fruit that is Rudraksha. It is also said that one who wear this divine fruit achieves eternal blessing and is deemed closest to lord Shiva himself. Rudraksha is mainly found in Nepal and Java Sumatra Island, and found one facet to fourteen facets and a unique kind is called Gauri Shankar.

Rudraksha is a large evergreen broad-leaved tree. Its scientific name is Elaeocarpus Ganitrus and it belongs to Tiliaceae family. The trees are perennial and grow almost 50 ft to 200 ft. Rudraksha beads are fully covered by the outer shell on blue color on ripening. So, they are even called the blueberry beads. The beads are used to treat many diseases. Rudraksha, being organic, is worn without contact of metal. Generally, the beads are strung together and made garland. Traditionally, there are 108 beads and one on the top. The extra plus is called Bindu. Rudraksha is worn to generate heat and energy in the body. It is believed that it is very good to wear by the travelers. Rudraksha is used to do meditation and sanctify the mind, body and soul.

The Ammonite Fossils are described as black fossil stones and characterized by the disc marks as they are worshipped in temples, monasteries and houses by Hindus as a visible and natural presentation of Lord Vishnu.Lord Vishnu (Shaligram) and Basal Plant (Tulashi) came upon the earth for the benefit of mankind in Kaliyuga. Just like the worship of Shiva is done in form of linga, Vishnu is worshipped in form of Shaligram. The source of Shaligram is Damodar Kunda (Lake) which flows as the river Kali Gandaki where one can find Shaligram (Muktinath Kshetra). Damodar Kunda is a sacred pilgrimage site.

Scientists call black fossil ammonites and the name derived from Pliny the Elder in the first century by a Roman naturalist. He called the fossils Sammonis Cornua which means the horn of Ammon. Ammon was the Egyptian god who wore curled horns on his head.We find two types of Ammonite: black and white. Shaligrams are the remains of extinct animals, mollusks of the cephalopod family. According to geologists, they are 140 to 165 years old.

The spiral shaped ammonite is more common and is considered sacred to worship. There is a beautiful story about Saligrams how it was formed.  Shiva once claimed his wife, Parvati, the most beautiful woman in the universe but instead she disagreed and said that the most beautiful woman in the universe was the wife of Jalandhar, Brinda. So, Shiva sent Vishnu to see at Jalandhar’s house whether Parvati was right or wrong. Vishnu was very much enticed by Brinda’s beauty and he disguised himself as her husband. Brinda came to know that he was not her husband and she cursed him to be a stone. Thereafter, Saligrams are worshipped by Hindus in Nepal by men.

Saligrams are enclosed in black carbonate stone and look like black balls rounded smooth by weathering and the action of the rivers. Some ammonites have a spiral shape and a few have a tube like structure. In life, they resembled a shell-less octopus, squid, or cuttlefish. Most Saligrams are small enough to fit in a fist. It is very rare to find larger Saligrams. However, one large Saligram is preserved as the Vishnu Mandir (temple) at Muktinath.Saligrams contain fragments of pyrite and quartz crystal, some people claim that there is gold or diamonds inside the fossils. Those sparkling black fossils are what gave the Kali Gandaki (Black Gandaki) its name.

It is a substitute of diamond found only in the icy mountains. It is very cold and transparent just like ice. Spatika garland is good to calm the body heat and hence helps people with bad temper. Quartz garland is good for meditation (Devi Japam) and the holy books describe the benefits of worshiping Spatika Shivalinga and Spatika Sriyantra. It is said positive energy is developed by keeping Sriyantra at home.

Quartz is a rock-forming mineral. We can find Quartz in different parts of Nepal. There are various types of Quartz like Smokey, Rose/Pink (Amethyst), Yellow (Citrine) and colorless Crystal (Rock Crystal) are the gym varieties found in Nepal. They are very good to cut and polish for gems. Colorless Quartz crystals and dog tooth spar are also used as decorative pieces and are exported to foreign countries.

Therefore, if you are interested to get Rudraksha, Ammonite fossil (Shaligrama), and Quartz (Spatika), we can organize a day tour to reach to the place. You could enjoy the tour with Himkala Adventure, find such stuffs and heighten your spiritual journey.