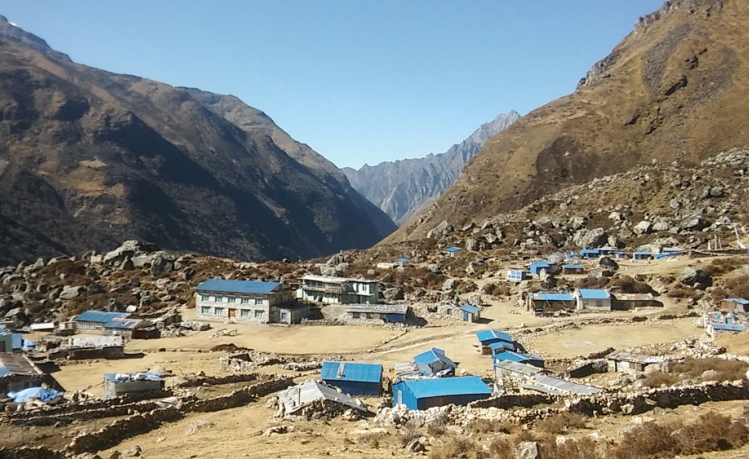 We woke up early and rushed to have breakfast and make the bus to the Langtang region. The ride took all day; once again the Nepali music was blasting the whole way. The last few hours of the journey were up in the hills; the progress was at a snail pace but the scenery was nice. The road was just dirt and barely as wide as the bus, and so whenever a vehicle came from the other direction either one of us would have to reverse up to the nearest fork or widening in the road. Some parts were so steep the road would wind back on itself six or seven times without making any forwards progress. It was nice to go for a stroll once we arrived in the afternoon. The village we were at for the night was clearly heavily impacted by the earthquakes; many buildings, a year on, were still nothing more than skeletons of rubble. Australian and American aid tents were still set up, despite, I'm quite sure, no longer being used for aid. The people and the culture seemed slightly different, Shiva said this was because the region was very Tibetan influenced. We had dinner at the guest house with the only other guest, a French man who was hiking alone.

We had an early start, walking first the way we had gone the afternoon before, starting at about 1400m above sea level. From there we went on further up the valley, following the rocky aqua stream. Immediately I realised this trek was going to follow much less of a beaten track then the Poon Hill trek, the path in some places was barely visible. We crossed the river a number of times, over suspension bridges laden with prayer flags. One of these was very questionable; the steel frame holding it up at one end was leaning at a forty five degree angle. We saw a lot of wildlife along the way; monkeys in the trees and even on the path, yaks grazing on the cliff edges, bee hives hanging from the rocks, mules, squirrels and birds. Shiva pointed out what he thought to be fresh leopard droppings on the track. We had lunch at a little restaurant by the stream, because the tracks had been so quiet they were only serving one thing: vegetable fried rice. It was good, although I would have enjoyed any meal with such a view. Later in the afternoon we came to our stop for the night, a very peaceful little Tibetan village at 2400m. I went and sat by the river for a while, taking it in. Then at our guest house I had a cup of tea with yak's milk, which tasted odd and I'm still unsure about it. I had a freezing shower, and then went and warmed myself by the fire, reading my book. Later we had dinner by the fire; it seemed to be just us and the family that ran the place.

The desolation of Langtang

After a nice breakfast of pancakes and porridge we headed off. The trail started off much like the day before, through the forest and along the stream. Then it took us higher up in the valley, and the land became far more barren; consisting of mostly thorny dry bushes and rock. Yaks grazed the fields, standing motionless and watching us as we watched them. We stopped at a guest house for lunch, and as we had our Dal Baht we were joined by three other trekkers, the first we had seen all day. We continued on and soon came to where the old village of Langtang had been destroyed in the avalanche. It was now a desert, a huge space of nothing but rock and the occasional reminder of what had been: lost pots and bowls, torn mattresses, and destroyed pieces of metal appliances. At the far side was a prayer flag laden monument to those who had died 175 locals and many tourists also. The new village was built not far onwards, the houses were more modern but built still in the Tibetan style, and here we would stay the night. The guest house had a proper shower, so after enjoying that I sat by the window reading my book and watching the sun set over the valley.

As the cook had left for work before sunrise, we could not get breakfast at our guest house, so we started walking and found a tea house to eat at. The whole family gathered around the fireplace to help cook my porridge. We continued on, and as we did the snowy mountains rose up ahead of us. The town we would stay at for the night was nestled inbetween a number of these peaks, and so when we arrived by lunch time we had a quick meal and started climbing one of the smaller ones. It was called Kyanjin Ri and by small, it was 4700 metres high. 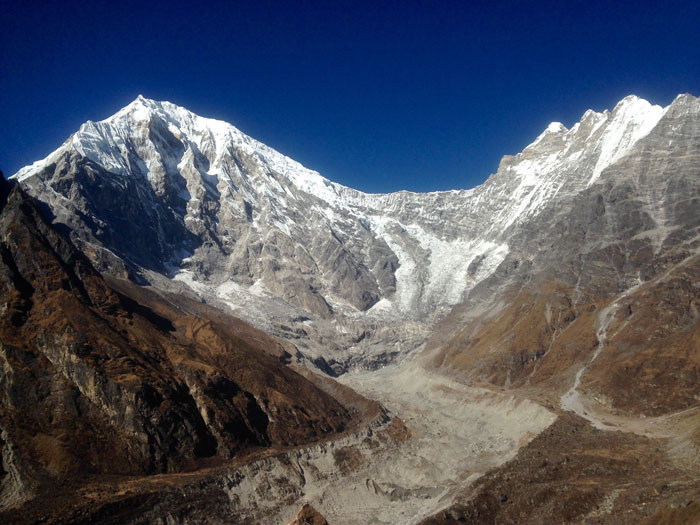 Despite having no packs to carry it was the most difficult climb of the trek so far, but the view of the mountains, villages, glaciers and frozen lakes was amazing. We began climbing higher still to the second peak, but I began to suffer from a combination of dehydration and altitude sickness, and so we turned around. By the time we got back I had a bad headache, so I went to sleep early. During the night I woke and pulled back the curtains to see the incredibly bright stars over the moon lit mountains.

Mandolins and Bonsais; of the Nepali kind

I was feeling better in the morning so after breakfast Shiva and I walked up to the frozen lake, it was a nice view. The hillside was spotted with amazing natural bonsais, crafted by the strong winds and the continually grazing of the yaks. After an early lunch we started the long walk back; we planned to go all the way to Bamboo, the village we had eaten lunch at on the first day. It was down hill the whole way, and we kept up a fast pace, eventually the sun set and we walked the last hour in darkness. I was glad we made it to Bamboo, for after a nice dinner the host of our guest house brought out his instrument. The instrument was local to the Langtang region, it was like a small wooden mandolin, with no frets and a skin covered body like a banjo. This particular one was carved with a dragon's head above the tuning pegs. He played for us, and even gave me a try. He couldn't tell me what the tuning was, but I found a few notes and with a mandolin strumming pattern I could make a nice tune. Eventually our hosts put out the fire and went to bed, and so, as there were no other sources of light, did I.

I woke up early and watched the stream for a while before joining out hosts for breakfast by the fireplace. I tried Tsampa, it was very bland but okay. Our hosts told us how ten military men had been sent into the valley to catch some poachers - the endangered musk deer are poached for a fragrant chemical in their navel. We trekked up the side of the valley, adjacent to the way we had come, through the forest. We saw lots of monkeys, and some Monal birds. We came to a really nice village on a rice paddied hillside, Thulo Syabru. For dinner I had T mo:mos, which are basically mo mos without the filling, with curry, and it was really nice. One of the hosts was interested in mandolins, so I told him about my two, and I told him to listen to Winterbourne, an Australian mandolin playing band. For the first time since starting the trek we had internet, so I spent some time messaging friends from home.

I went for a walk around the village, to a stupa and along some terraces then had a cinnamon and peanut butter pancake for breakfast, overlooking the valley. It was very nice. We started walking back out of the valley, and could see many distant mountains for most of the way.

Then we came onto a road, and I listened to some Winterbourne as we went. The town we would stay at for the night didn't seem so interesting, so after lunch and walk around, we rested at the hotel. For dinner we found a place that did good curry and roti.

Trekking through the Langtang Region was the most amazing experience of my travels in Nepal. The scenery, with the snow capped mountains, lush forests, frozen lakes and huge glaciers, was breathtaking. Within only three days of walking we came to Kyanjin Ri, a summit of 4800 meters and a great vantage point of the all that the region has to offer. The culture was equally incredible - the region is known for being highly influenced by Tibetan heritage, and this we found to be evident in the picturesque architectural style of the villages, the delicious food and the super friendly people. I’m very glad I did this trek with Himkala Adventure, Shiva was a great guide; knowledgeable, friendly, and flexible with where we would go and at what pace. Thank you so much Shiva! I'll never forget this journey.